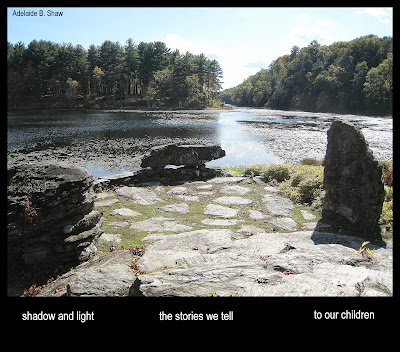 Funny coincidence. I've just had a "stories we tell" ku accepted at Modern Haiku. Yours is lovely.

By the way, have you seen the Canadian film "Stories We Tell?" If not, I recommend it.

Congrats on your haikku for MH. It's expected that poets will use similiar images, even exact phrases. Deja ku. Presence had an article about this a couple of issues back, followed up by comments in the latest issue, my comments included. In my comment I pointed out that I often copy from myself without realizing it until I see it sometime later.

Thanks for the film recommendation.
I'll look for it.

The rocks, with their shadows, work well for this haiga.

Yes, "coincidence," synchronicity, deja ku. It does happen relatively often. Hard to know what to do sometimes. But if it's an innocent coincidence, and the poems are overall "reasonably different," hopefully we can keep/publish them.