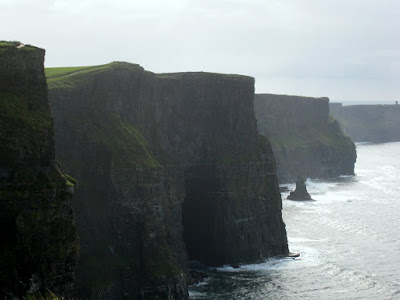 Wild and raw. rugged and dangerous. Sheer layers of sandstone and black shale rising from the beach 394 feet to 702 feet at the highest point, extending five miles long, formed millions of years ago.

Jutting rocks, ledges of tufted grass and small crevices shape the sides of the Cliffs, providing nesting places for numerous birds.At the southern end, a cave entrance, a black hole inviting speculation. A hidehout for robbers? A sacred place for Celtic tribes? The lure of legend and myth. At the northern end on the beach, a column of rock rising 230 feet, the giant sea stack called Branaumore.

waves and wind
washing away the Cliffs
now...and now...

These majestic Cliffs require my silence to absorb the sights and sounds, the smell of the sea and the dampness of the mist. Sea birds screech and cry; waves pound rocks sending up a roar and heavy spray; the wind teases one minute and bullies the next.

shifting clouds
in the sequence of a breath
the mist clears

I can almost feel the place.

Awesome, the photo, the info and your thoughts; just complete; much love...

It was an awesome area. thanks.