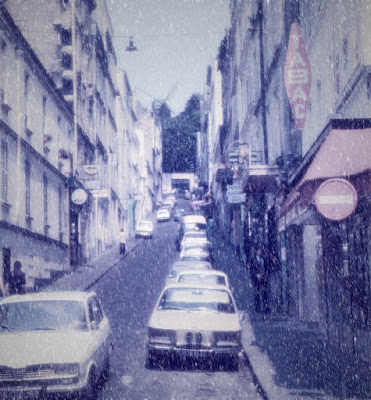 I am a woman alone, sipping wine in a corner café. On this last Thursday of November the Brussels sky is overcast.  The awning on the tobac across the street flaps in the wind.

bell above the door–

settling near the window

The café, named after a local beer, has blue décor. Blue and white tiles on the floor, blue and white ceramic plates on a ledge along the walls, blue and white half curtains on the windows, a blue haze of smoke swirled across the ceiling by a creaking paddle fan.  The proprietress, wiping glasses behind the bar, has a cigarette burning in an ashtray. Two customers drink coffee and smoke.  I light up my own.

Outside, snow flurries, spattering shoppers’ coats, parked cars, the tobac awning.  The old fashioned pendulum clock loudly ticks away the afternoon. Dusk darkens into night.  Lights come on outside and in the café.  Through my window reflection I see a familiar figure hunched against the wind-blown snow.  His conference over, my husband joins me.

cold hands in mine

he orders brandy for two–

Ah yes you took us there: the decor the atmosphere, nice haibun.

__ So heartfelt, Adelaide: as hands clasp... within this blue and white.

such white snow
floating in this blue haze
care unites