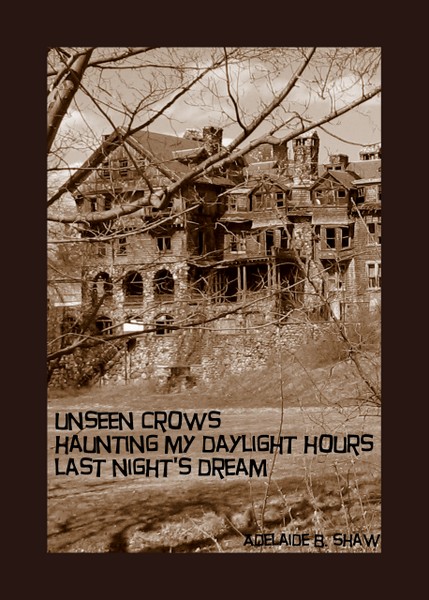 Haigaonline
Posted by Adelaide at 8:16 AM

I would not go in that building for a million dollars!
There is something haunting about the sound of crows, that is for sure.

This was once a hotel, then a women's college, the Bennet College for Women and closed in 1978. it is in Millbrook, NY, still standing, encloseded by a chain lead fence now to keep people out. A consortium has bought it with plans to take it down, but, was still standing when I left Millbrook a year ago. Spooky, for sure.

'Tis has been a year since you left Millbrook? I am amazzzzed_!

__ At times, history can be maintained in an alternate form. K and I were angered years ago, when a small and ancient stone cabin was razed, and in that then vacant spot... a new home was built, seemingly ignorant of that cabin's history. But, its newness maintained that older and classic style, and in completion the stones of that old cabin, were a basis that trimmed the front walkway, a new garden plat, and attractive outer borders. History's stones, became a monument.

There was or still is a TV show about a company that took old barn wood and used it in building new barns and houses.