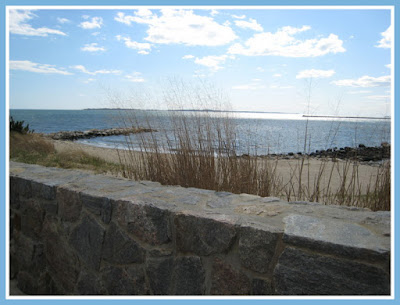 SUMMER OF 1944
Daily headlines in the local newspaper:   POLIO.  INFANTILE PARALYSIS.  POLIOMYELITIS.  Whatever it is called, it's talked about in whispers.  Like a dirty story.
Beaches, parks, movie houses, all remain open.  Hardly anyone goes. It's in the air; on the benches; on the toilets. Stay home.  Stay inside.  And so we do
On one Sunday afternoon my father can take only so much of my sister and me.  He reasons that with most of New Haven staying home, it would be safe to venture out. And there we are, tripping off to the beach on the open-air trolley. Anticipation mixed with disappointment. No one singing or laughing, no large party groups out for a good time.
The beach at Lighthouse Point is nearly empty. Only four or five families.  And a lonely lifeguard in his tower. We spread our blanket, yards away from anyone else.
"Stay away from them," my father warns.  "Don't play with those children."
We hadn't played with anyone since Billy O'Hara was rushed to the hospital by ambulance two weeks earlier.  Will we get sick?  Will Billy die? Rumors rolled down our street like a loose ball.  He's dead already.  He's alive. He's paralyzed.  He's in an iron lung.  He's only 10 years old.
low tide water line–
a little girl races
her shadow
Presence, #29 May 2006

Intriguing story told through your haibun