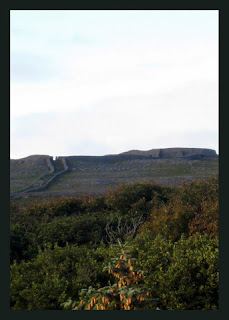 INISHMOR
The Aran Islands, IrelandThe ferry docks at Kilronen on the Island of Inishmore, the largest of the Aran Islands. Pony carts and traps and taxi minivans wait for the arrival of visitors. We take a pony trap painted in green and deep mahogany pulled by a sturdy Connemara pony sporting a green harness. A lean, wrinkled old man at the reins takes us to where we shall spend the night, the Kilmurvey House in Kilmurvey.a slow clip-clop
rising above the windthe old man's songOur driver points out the small rock walled fields, several to a homestead, and the carefully placed spaces in the walls to allow the wind to pass through. He slows down and crosses himself when we pass a stone cross along the road.lost at seaor gone to the new worldprayers for the deadThe Kilmurvey House, built over 200 years ago, is a large and impressive stone farmhouse. Beyond it is Dun Aonghasa, a prehistoric fort on a cliff above the Atlantic. Stone walls outline a rough path leading to the top.half-way therea pause to measuredesire and strengthWe turn back and explore a closer and more recent ruin, a seventh century church.broken stone altarin the wild flowersa pile of trashStone and more stone, everywhere we pass, bulging through the ground, forming houses, stacked into walls, along the roads, separating fields and houses, representing hundreds of generations of labor required to clear the land needed for building and for grazing livestock.wild blackberry vinesholding together stone walls-the bitter fruitDark clouds blow in, drop a shower, blow out again.
the rainbow's arcspanning several fields
at which end is gold?Kilmurvey has only a few shops and one café, all of which close early. There is not much to do at night, which is fine with us.Inishmor nightthe rush of windmakes no soundpassing cloudsa wink from the moonbefore bed

lovely, lovely, thanks for sharing;
much love...

Thank you, Gillena. Always glad to have to visit.

I love this, so enchanting!

Thank you, Nicole. It is an enchanting island.